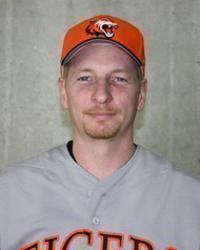 Rob Grow is RIT’s all-time leader in coaching wins and 2006 RIT Athletics Hall of Fame inductee, begins his 27th season at the helm of the Tiger baseball squad in 2018-19. Grow surpassed the 500 win mark in 2019.

In 2017, Grow and the Tigers enjoyed their finest season in program history, winning the Liberty League Championship for the first time, while making their first NCAA Division III Baseball Championship appearance.

A member of the Empire 8 conference from 2000-2011, Grow coached 100 All-Empire 8 selections. Since moving to the Liberty League in 2012, 28 different players have earned all-league honors. He has also mentored 31 ABCA/Rawlings All-Stars, including the 2007 Empire 8 Pitcher of the Year, Dylan Rees. Four of Grow’s former players, Colin Bradley, Tim Hern, Andy Schild and Dornes are in the RIT Sports Hall of Fame.

Grow is a 1988 graduate of RIT, where he played three years of baseball for the Tigers as an outfielder. He is among the career leaders in runs scored, walks and on-base percentage. In 1988, he set the Tiger single-season record with a .554 on-base percentage.

After graduating with a bachelor's degree in business, Grow was an assistant coach at Rush-Henrietta High School. In 1990, he helped guide the squad to a Section V title.

In addition to his duties as full-time head baseball coach, Grow is also the athletics department liaison to the alumni relations department at RIT and chairperson of the RIT Athletics Hall of Fame. He resides in Victor with his wife Suzanne, sons, Casey and Brady, and daughter Riley.