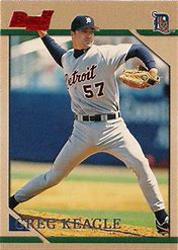 Keagle was on the Detroit Tigers' Opening Day roster in 1996, and made his debut in their first game of the season, April 1. He pitched three innings, surrendering three hits, walking two and striking out two. He allowed one earned run. His first career strikeout victim was Chuck Knoblauch. He then immediately struck out Rich Becker for his second career strikeout. He recorded 123 total big league strikeouts in just over 171 innings of work.

Perhaps the best game of his career came on September 12, 1997, against the Oakland Athletics. He threw seven fine innings of work, giving up only five hits, one run, walking only one, and striking out nine batters.  Two of those at the expense of slugger Mark Maguire.

Greg wore the number 57 during his entire MLB career with the Tigers.  A tradition both of his boys have carried on with pride during their careers with the G2P Tigers!

Although knee surgery ended his major league career in 1998, his professional career lasted until 2005. He stayed in the Tigers' organization in 1999, split time between the Anaheim Angels organization and the Elmira Pioneers in 2000, where he threw the first ever no-hitter in 100+ years of Pioneers history (and just one of three in Northeast League history). In 2001 and 2002, Keagle was both the pitching coach and starting pitcher for the Pioneers.  He continued his professional coaching career the following year serving as Manager/Head Coach of the Pioneers for the next few seasons.

Greg retired from professional baseball in 2005 and soon thereafter began helping Rob with the RIT staff.

Under Keagle's tutelage, the RIT pitching staff has become one of the best in all of Division III. In 2015, three pitchers earned All-Liberty League honors, while the staff as a whole recorded a 3.88 earned run average, walked just 98 batters in 308 2/3 innings, while holding opposing batters to a .256 average. In 2016, RIT pitchers set a program record by striking out 230 batters.

Greg resides in Pittsford with his wife Danielle, and children Olivia, Jack, and Luke.