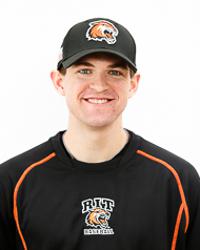 Tyler Leichtenberger is a former standout with the RIT Tigers, pitching at RIT from 2011-2014. As a player and a coach, Leichtenberger has been at the forefront of RIT’s rise to prominence since moving to the Liberty League in 2012.

Last season, RIT advanced to the Liberty League Championship Tournament for the third time in four seasons and won 20 games.

Leichtenberger pitched in various roles on the staff during his four years as a starter and a reliever. A two-time All-Liberty League selection, he holds school records for both saves in a season (7) and career (14), and is fourth all-time in appearances (49).

Originally from Warren, Pa., Leichtenberger is employed as a mechanical engineer at Delphi Corporation and resides in Rochester.